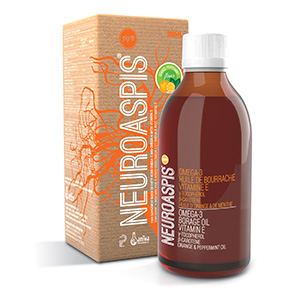 NEUROASPIS® plp10 is an advanced mixture containing antioxidant vitamins such as beta – carotene (vitamin A) and mixed tocopherols (vitamin E). Proven all the abovementioned fatty acids are found as the main important composition molecules in nerve cells (neurons) in the blood-brain barrier, with significant involvement in industrialism as the immune system and also by direct involvement in chronic neurodegenerative disorders. The main feature is their correlation with the return to normal cellular pathologies of endoplasmic and mitochondrial stress effect, such as neurodegenerative diseases.

NEUROASPIS ® plp10 is a nutraceutical (with natural biomolecules), administered orally, can be co-administered with all other available treatments, showed great effect in reducing the frequency of relapses (flares) of the disease but mainly on the progression of the disability of patients. Finally, it is also potentially able to trigger remyelination, neuroprotection and mainly free of side effects. It thus has the ability to influence a holistic treatment of the disease, since it can affect the total known biological and biochemical network of pathogenic/pathogenetic events and mechanisms that cause the disease, including the biochemical mechanisms responsible for remyelination and restoration of neurons (healing).

According to a published scientific work in the BMJopen peer reviewed journal [1] PLP10 showed significant efficacy for the sample of patients in the study, compared to placebo, reducing the frequency of relapses of the disease up to 72% and the possibility of disability progression up to 86% (when patients on natalizumab were excluded) without any severe side effects.

NEUROASPIS® plp10 is registered for a USA and a Worldwide patent and is Trade Marked Globally.
WORLD PATENT (WO2012131493) – COMPOSITIONS FOR THE TREATMENT OF NEUROLOGIC DISORDERS

A Short story and science behind the product
NEUROASPIS® plp10 is a cocktail food supplement oral formula that has been specifically designed to overcome the well known biochemical deficiencies of the MS patients which are found related to the disease pathophysiology including recovery; and it has been tested through a proof of concept clinical study performed from July 2007 until December 2010. The preparation has been specifically designed by a team of three committed and highly specialized scientists (Dr. Patrikios I. Mr. Loukaides G. and Dr. Pantzaris M.) and produced in accordance to the innovative method of treatment philosophy and approach, the systems medicine, through systems biology. A holistic method that is for the first time ever applied towards the treatment of this chronic incurable disease. All of the ingredients used are of high quality, natural and specifically prepared for the formulation demands of NEUROASPIS® plp10.

The study was accepted and published in one of the most prestigious and World renown medical scientific literature, the British Medical Journal, open edition, after an independent assessment by world-class scientists with knowledge, long-term experience and international recognition in research and treatment of MS. The product is registered for a USA and a world patent and is available for purchasing worldwide.